Kentucky is home to hundreds of miles of caves and winding caverns. When I was in Kentucky, I looked for the cavern where Abe was stuck near the place where Hodgen’s Mill once stood. I couldn’t find it. I’m not sure exactly where that cavern is or what it looks like.

It could have been a wide opening to a natural spring like that at Abe’s birthplace, the Sinking Spring farm.

It might have been a wee entrance into a vast maze of stalactites and stalagmites like at what is now called Kentucky Caverns. When I visited that cavern, the guide told me that, in 1799, a little girl, Martha Woodson, discovered the opening because she felt cool air blowing up through a hole in the ground. She rushed home to get her brothers and they lowered her down into the cavern on a rope. Had she just walked in, it would have been a nearly thirty-foot drop! The caverns are lit and have stairs and guide rails to hold on to now, but when Abe was little, a cavern like this would have been pitch black and slippery. You could fall, get stuck, or become lost easily. The rock formations are huge and fascinating, taking hundreds and thousands of years to form from a steady drip of water.

I also explored the Lost River Cave. There, people held dancing events underground where it was cool. Nationally known bands would play there inside the cave. A river winds its way through the cavern, and we traveled by boat to explore the deep reaches. The site was a campground to soldiers, both Confederate and Union (at different times!), during the Civil War. Deep blue holes surround the property.

The largest cave structure in Kentucky is Mammoth Caves. I’ve been there twice. Their website is full of spectacular shots. More than 400 miles of the cave system have been explored and charted, but new caves continue to be discovered all the time. No one knows exactly how big the underground labyrinth is.

With all this hollow area underground in Kentucky, sinkholes can open unexpectedly. At the Corvette Museum in Bowling Green, Kentucky, a massive sinkhole opened at the factory site in 2014, and eight corvettes fell in. When I was there, I looked down into the sinkhole. It was protected by glass, but I was still scared. I didn’t want to get too close. Imagine a huge hole opening in the ground and everything toppling in! 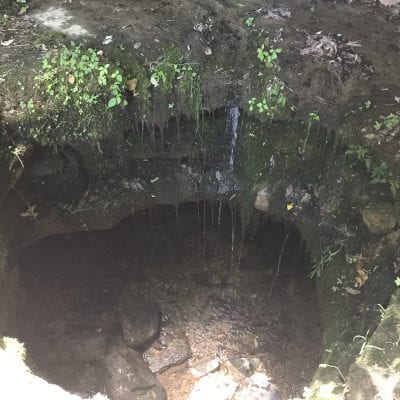 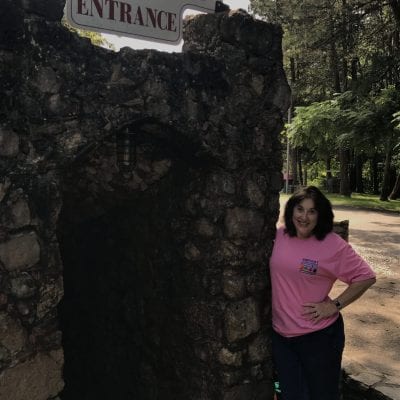 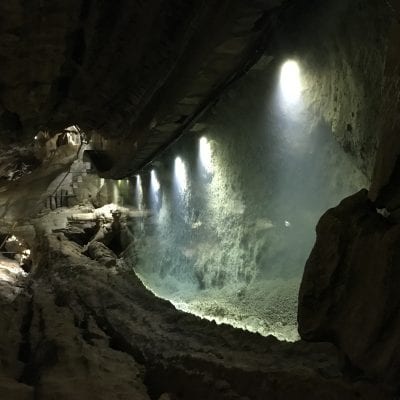 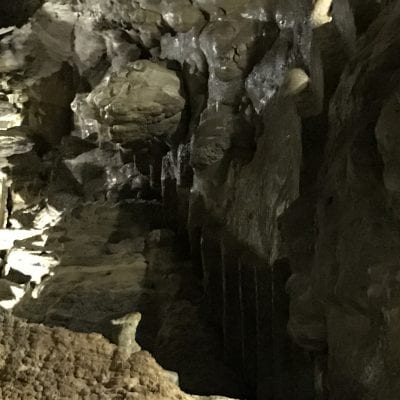 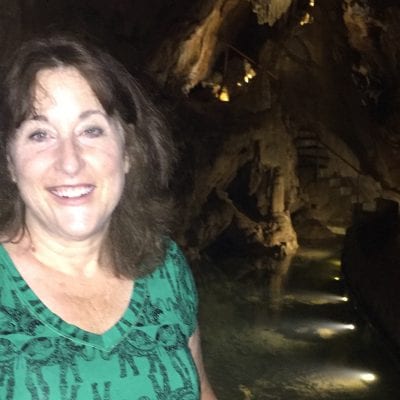 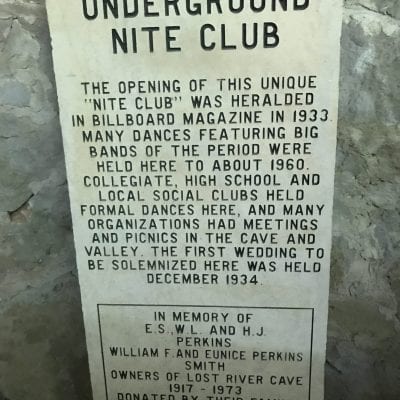 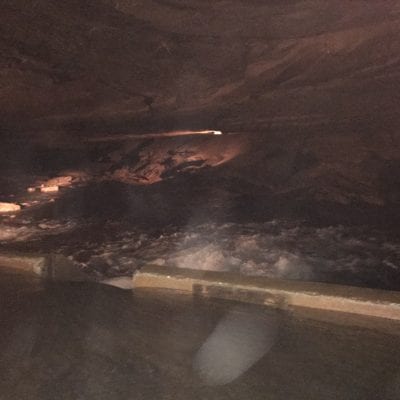 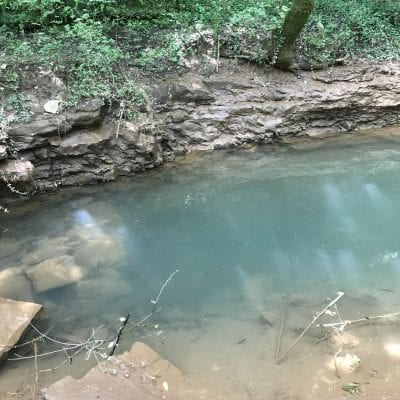 I’ve been twice to Kentucky to walk in Abe’s footsteps. This pretty cabin is nestled at the base of the hills next to Knob Creek. It is not the exact cabin that Abe lived in, but a reconstruction, built with logs from the Gollaher cabin after Abe’s best friend, Austin, passed away. It was a very rustic cabin, with a dirt floor and just one tiny window. It is just one room, and there is no glass in the window. The Lincoln family had meals prepared over the fire. Among other things, Thomas Lincoln, Abe’s dad, was a carpenter. Authorities believe he built this actual corner cupboard. It has his initials carved into the back. Chuck Groenink put this cupboard into our book. 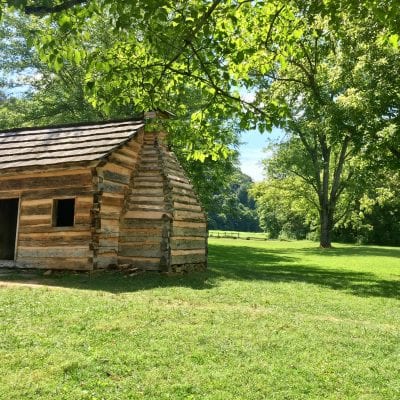 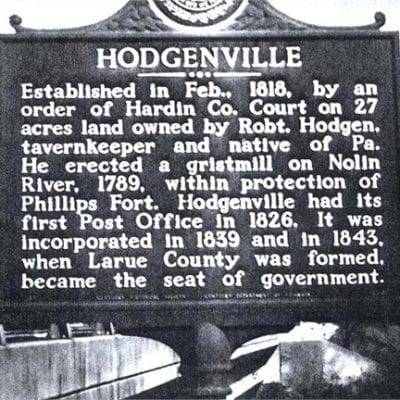 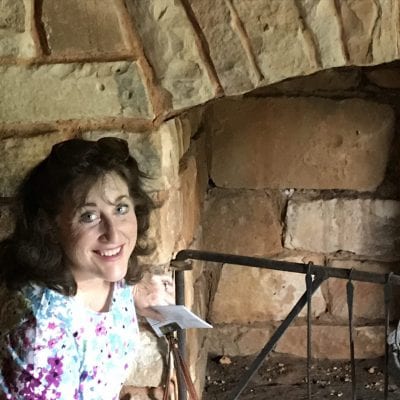 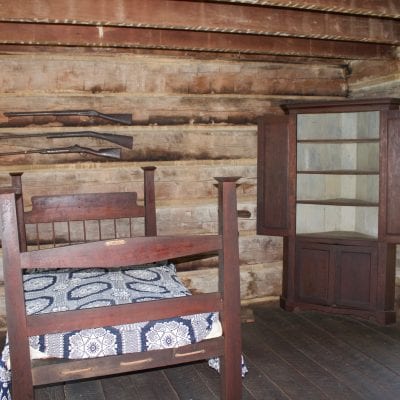 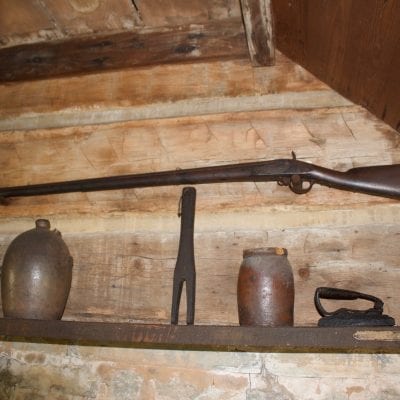 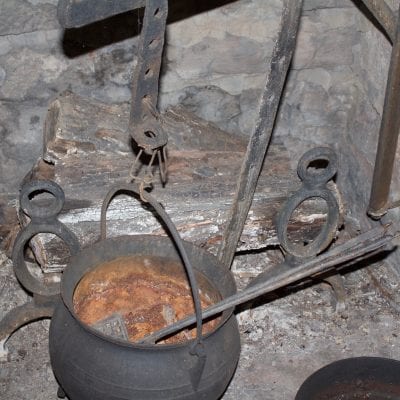 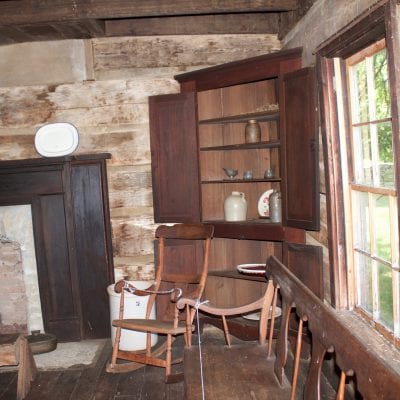 Where did Honey come from?

As I discuss in the book, Abe found Honey at the base of a cliff. Poor Honey had a broken paw. How Honey got there is troubling. Austin tells about a stranger coming to town with a big scar on the side of his face. When he sees Honey, he tells Abe that is his dog, Whistle. Honey starts to growl at the stranger, and Abe can see Honey doesn’t like him. Abe gets angry, too, when the stranger says he kicked Honey over the cliff and left him there. Rather than give Honey back, he and Austin go back to the Lincolns’ cabin where Abe’s dad agrees that Honey belongs with Abe and fights off the stranger.

Hodgenville has a statue of Abe and Honey right outside The Lincoln Museum.

My dog, Honey, wasn’t named after Lincoln’s dog. It’s just a very happy coincidence. Instead she was named by my granddaughter, Lily, before I even wrote the book. I’m not sure Honey likes her raincoat. She will be 9 on April 4th, 2020. 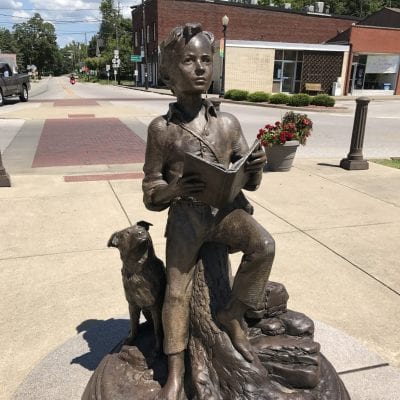 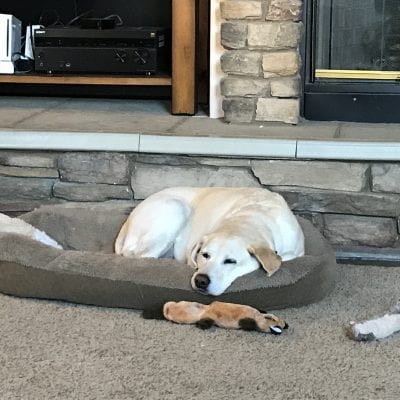 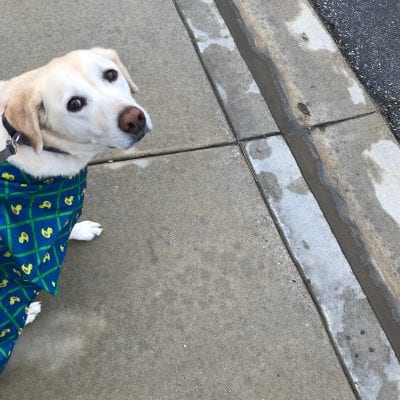 Austin Gollaher was Abe’s best friend when he lived in Kentucky. Austin and Abe were as different as chicks from chickpeas. Austin loved to hunt and fight and get into trouble. Abe couldn’t stand animals getting hurt and spent his free time trying to learn how to read. Austin never moved away from his Kentucky cabin, growing up to be a Sunday school teacher, hunter, and sometime justice of the peace. When he was president, Abe once said that of all the people in the world, he would most like to see Austin.

Mr. John Hodgen was Abe’s hero. Abe admired Mr. John’s gentle strength and wisdom. Abe told Austin he hoped to come back to Knob Creek when he grew up and take over the mill from Mr. John. Abe thought all the kids in Knob Creek should learn how to behave more like Mr. John.

Sarah Hodgen, Mr. John’s mother, adored Abe. She set up a special place in her house where Abe could stay over and taught him how to read and a bit of math. Austin said that Missus Sarah would frequently ask Abe’s mother if she could keep him. Nancy Lincoln would laugh and say she couldn’t spare him. Abe said he knew why Missus Sarah’s hair was white—because she was an angel.

Nancy Lincoln was a delicate woman, frequently sick. She died not long after the Lincoln family moved to Indiana from drinking tainted milk. Austin tells how she was frequently ill in Kentucky, too. Abe worried about her and took care of her when she needed to rest. This picture isn’t an actual photograph. It’s how an artist imagined she might look. Thomas called her ‘his beautiful Nancy’. Abe said, “All that I am or ever hope to be, I owe to my angel mother.”

Thomas Lincoln was rough on Abe. He believed in strict punishment and didn’t put much stock in Abe’s gentle ways. He saw no reason for Abe to learn how to read and would punish him for it. Abe would store the books Missus Sarah got him at the Hodgens’ house. Abe’s father worked him hard and would lend him out to work for their neighbors, pocketing the pay. Their relationship doesn’t seem to have improved as Abe got older. As soon as he was an adult, Abe moved away to strike out on his own. When Abe was president, he got word that his father was quite ill, perhaps dying, but decided not to go to him saying, “Say to him that if we could meet now, it is doubtful whether it would not be more painful than pleasant; but that if it be his lot to go now, he will soon have a joyous meeting with many loved ones gone before; and where the rest of us, through the help of God, hope ere-long to join them.” Abe did not attend his father’s funeral or pay for his headstone.

Sarah Bush Lincoln became Abe’s stepmother shortly after Nancy’s death in Indiana. Abe adored her, and she him. Her kind, loving presence undoubtedly helped Abe deal with the loss of his mother and his Kentucky friends and set him on the path to being the moral and wise leader of the United States. 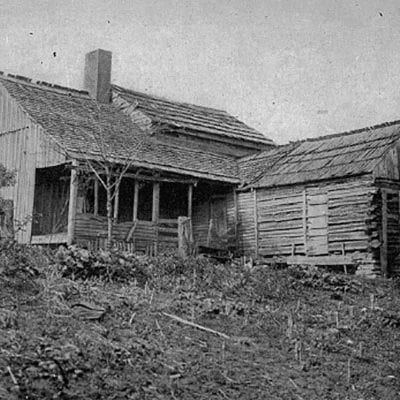 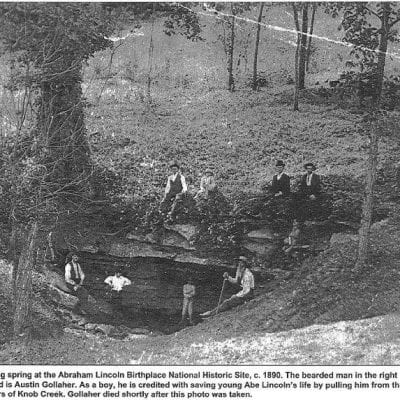 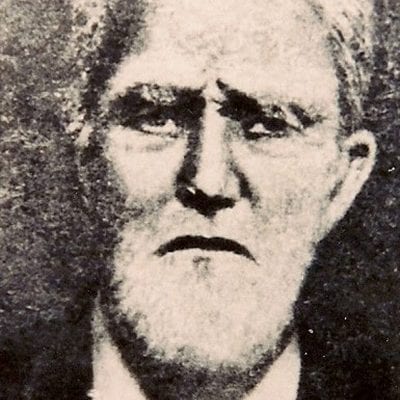 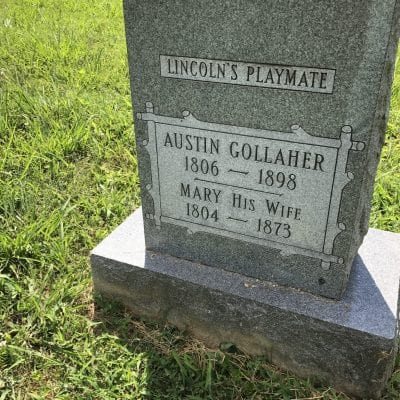 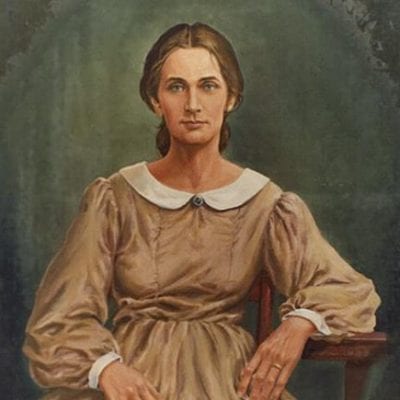 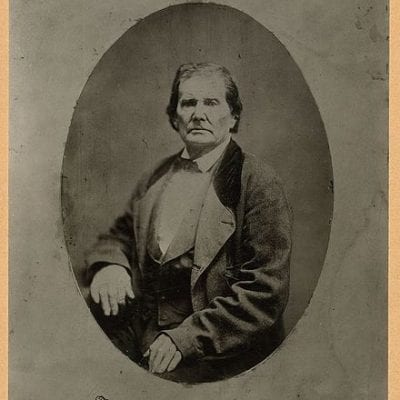 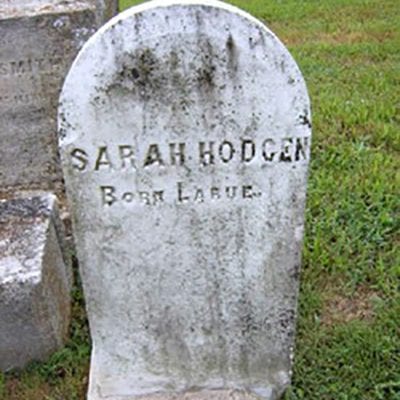 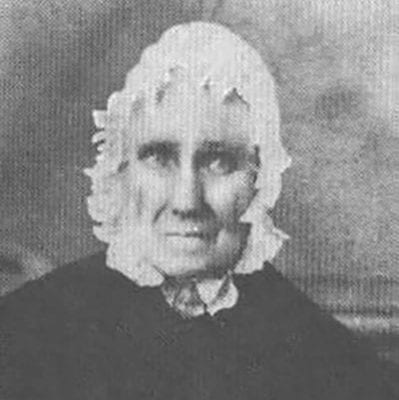